Forever and for Always

Forever and for Always is the eleventh episode of the fourth season of Nashville. It was written by Monica Macer & Dana Greenblatt and directed by Stephen Cragg. It first aired on March 16, 2016.

As Deacon and Rayna's wedding draws nearer, he's getting his suit fitted and practicing his vows with Frankie. Rayna is at the Highway 65 offices celebrating Markus' singles success. She's over the moon even though he bailed on his publicity tour. They later rehearse for the big event at a remote lakeside location that Rayna's mother loved.

At the rehearsal dinner, things seem to be going well as Maddie and Daphne take to the stage to perform a song written for the happy couple. However, Daphne stops singing since she's still upset with Maddie and the fact that Rayna and Deacon are getting married has made things worse for her. As they leave the Bluebird, they are swarmed by paparazzi. Deacon lashes out at one of them, pushing him to the ground.

The following day, they discover that not only has the footage of Deacon's attack gone viral but the location of the wedding venue has leaked. Rayna's publicist sees this as a problem as not only will they have to deal with the paparazzi but there will also be helicopters flying over the venue. However, she soon comes up with a plan to renovate a private barn for the wedding.

While all of this is happening, Avery is losing his mind over how to deal with Juliette's situation. He hears that she's getting better every day and that her time with Cadence has been going well, however he's sick of living a lie. He's had to pretend for weeks that everything's okay and he's losing his mind. Meanwhile, Cole has been spreading news that Will is difficult to work with since he dissolved their partnership. Will decides he's not going to the wedding since he doesn't want to be around industry people.

Deacon is unsure why Maddie and Daphne are acting so oddly towards him. Daphne is upset since she feels that as Deacon isn't her father she will be shut out of the family while Maddie is worried that her mother might be hurt by him due to his violent temper, since she witnessed him thrashing Beverly's room. When Rayna tells him this, he freaks out and starts to think that he isn't a good fit for Rayna and the girls. Tandy is also there for the wedding and has always disapproved of Deacon, especially considering his past with her sister.

Meanwhile, Gunnar is doing his best to show Scarlett that he's not interested in her by attempting to set her up with a taxidermist and a comic book lover. Avery is bombarded with questions about Juliette and he's drinking in an attempt to get through it all. Layla has returned for the wedding but Colt approaches her and tells her that he was a witness to Jeff's death and it wasn't a suicide as he was trying to save Juliette from jumping of the roof. Layla goes to the ladies' room to throw up.

After Frankie talks Deacon back from visiting his sister's grave, the wedding itself goes without a hitch. As Gunnar and Scarlett sing, Rayna walks up the aisle and she and Deacon exchange vows. They soon share their first dance as man and wife. Deacon dances with Maddie and reassures her that she has nothing to worry about and that she can talk to him whenever he wants. Rayna tells Daphne that she will always care about her father and Deacon invites her to dance with him. Scarlett also shares a dance with the taxidermist. Layla engages in an awkward conversation with Avery about Juliette, without revealing the truth about what Colt told her and Avery rushes outside, having a full-on panic attack. Maddie and Colt also act awkwardly around each other. She's still interested in him but he's completely distant with her.

After Deacon and Rayna leave the reception, they have a little downtime together, engaging in sex. Some days later, Layla meets with Bucky as she's ready to record her album and tells him that she wants to work with Avery.

Although credited, neither Hayden Panettiere nor Will Chase appear in this episode 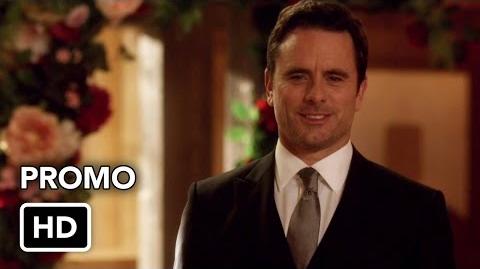 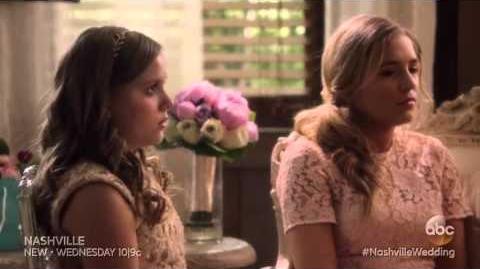