Start a Wiki
For the Sake of the Song is the fourteenth episode of the final season of Nashville. It was written by Scott Saccaccio and directed by Michael Lohmann.  It aired on July 12, 2018.

At the Jaymes-Claybourne house, Deacon is writing a new song as Daphne is featured on the news about hee recent buzzworthy performance on Nashville's Next Country Star. Gideon is feeling proud and taking the credit for his son's success, saying he was the one who taught Deacon how to play his first guitar and Deacon is not too pleased about it.

Meanwhile, Juliette is making big plans to confront Darius. Avery is worried that she is going to get hurt but Juliette is on a mission to bring justice to the movement for the way it has treated its followers and later confronts Darius at a meeting. He tells her that his staff was being overly cautious when his staff locked her in her room against her will in Bolivia. He contends that a worldwide organization has its challenges but they are helping people, confidently adding that what they are doing is within the law. When Juliette pushes back, Darius resorts to intimidation, saying that they have video evidence of her making threats and irrational statements. He mentions the non-disclosure agreement she signed before she left for Bolivia and tells her that if she talks to the press, the movement will sue her and her family for all they have.

Unfazed by all of this, Juliette contacts Glenn and tells him to get her publicist on the phone as she has a story to share. Glenn warns her against starting a war with Darius but Juliette seems pleased with herself once the article is released. However, she later learns that the media is portraying her as an abusive diva who demanded special treatment and was violent towards other members.

Elsewhere, Deacon and girls are wondering where Gideon has been wandering off to and Deacon does not believe his father when the latter says that he has been hanging out with a group of friends and Scarlett asks if Deacon thinks that his father is drinking again. Deacon decides to follow his father and finds that he has been telling the truth as Gideon is with a group of old men singing songs. Gideon asks Deacon to sing with them but the latter refuses, opting to listen instead and sip iced tea. Feeling overwhelmed, Deacon decides to leave and while at home he has some nightmarish flashbacks of his father being aggressive toward him while he was trying to play the guitar as a kid.

When his father gets home, another fight breaks out with Deacon accusing him of beating his love of music out of him but Gideon has a different version of events, arguing that he pushed his son out of love and sacrificed his own happiness so that his son could succeed. Deacon hits back by saying that the only thing his father gave him was a drinking habit that ruined his life and that he does not get to take credit for his music. Later once the dust has settled Gideon apologizes to Deacon, saying that he thought he was helping his son as a kid, but his anger and drunkenness took over. He adds that Deacon is a better man because he broke the cycle of drunkenness and alcoholism. He is proud of his son and tells him that he will skip his appearance at the Bluebird to avoid any more trouble. However, when Deacon gets to the Bluebird he expresses regret at leaving his father at home so Scarlett temporarily leaves and arrives back with Gideon.

At the performance, Deacon is asked to play the first song he ever learned and starts strumming a tune his father taught him while Gideon sings quietly to himself from the audience. Deacon then flashes back to happier times when his father gave him his first guitar and sat down with him for a lesson without any screaming or fighting. When they get home, they share a quiet moment with their guitars. Then Daphne drops laundry into her grandfather's room and finds an empty bottle of bourbon under his bed.

Elsewhere, after Alannah tells Avery that she cannot compete with Juliette and his family and that she needs time to figure things out, she heads to see Brad. While waiting for him, she overhears his receptionist crying to someone on the phone, telling someone that Brad has been mistreating her and that she will never get another job. When Brad arrives, he massages the girl's shoulders and whispers something in her ear. Rather than walking out, Alannah sits down with him and tells him she wants to be friends. He asks what kind of friends and she replies that they can be whatever kind he wants. Brad is not really convinced she is being genuine but he seems happy enough with her as a fake friend. They make plans to have dinner together.

Later, she receives a bouquet of roses from him with a note saying that he has got her an opening support slot on Friday, which she is delighted about. She goes to see Jessie and tells her about the receptionist and learns that the girl is his type. She reveals that he has had six settlements with former employees, some who reached out to her following the divorce. However, Alannah thinks that she can take care of herself.

Elsewhere, Maddie and Twig are chatting when Jonah comes in and tells Twig that he got him a date for his pajama party. He also wants to know if Maddie is coming with him on his European tour. Deacon is not really on board, thinking it will not be much fun trying to fit her into his schedule. Later at Jonah's house, his phone is blowing up with calls and messages from his ex-girlfriend Mia, although Jonah will not tell Maddie who is calling. He finally says it is his agent and goes off to FaceTime with Mia. She is crying and telling him that she is trying to get better but he says he should not be the reason she is seeking help. Meanwhile, Twig goes outside to see if Maddie is okay and it is clear that they are getting closer - something even Daphne notices as Maddie cannot stop blushing whenever his name is mentioned.

The pajama party arrives and Twig is a little tipsy. Maddie is dancing with Jonah when she tells him she has decided to go to Europe with him. Twig comes running up to them to tell Jonah that the neighbors are complaining about the noise. In reality, Mia has arrived so Jonah excuses himself, telling Twig to look after Maddie and heads to the laundry room with Mia, where they start making out. Twig tries to distract Maddie and they end up slow dancing and almost kiss before Maddie remembers Jonah and runs off to find him. She comes across her half-naked boyfriend and his ex-girlfriend making out and runs off with Jonah trying to stop her before he lambasts Twig for not telling her about Mia. She heads home to cry in her room while Mia slaps Jonah. The following morning, he sits in his pool feeling dejected a tells Twig he had one job.

Alannah and Brad have dinner together and flirt. He thinks she likes him, even though she labels him a user and narcissist. He takes her hand, saying he does not think he stood a chance with her. She tells him he does not but remains all coy and smiles as she holds his hand. The following Friday they are backstage, Brad puts his hand on her shoulder and she tells him he is scary when he is nice. He then goes to kiss her but she moves away. He kisses her cheek instead and she goes out onstage to perform. The next day she is parked outside his office as his secretary leaves work, seemingly preparing to make her next move. 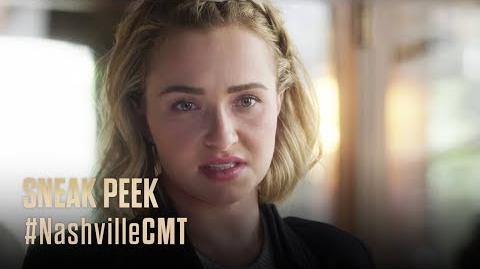 Retrieved from "https://nashville.fandom.com/wiki/For_the_Sake_of_the_Song?oldid=23080"
Community content is available under CC-BY-SA unless otherwise noted.