Fire and Rain is the eleventh episode of the fifth season of Nashville. It was written by Jesse Zwick and directed by  Timothy Busfield. It aired on March 9, 2017.

Down at the Highway 65 offices, Bucky is discussing tour plans with The Exes but Scarlett is reluctant to leave Maddie and Daphne so soon. When Zach suggests releasing Rayna's last album to the public Deacon is reluctant since it remains unfinished. Zach says the album of a recently-deceased star will sell like hotcakes but Deacon is prepared to stand his ground.

Back at home, Juliette drops by with groceries as Maddie's phone continuously rings. Due to the attention her CMT Awards performance has received everyone wants to talk to her but she just wants time to grieve. However, Juliette thinks all this attention will give her the opportunity to follow her dreams. Although Scarlett tries to interject, Juliette offers to take her to New York herself but Maddie believes people are only interested in her since she cried on national television. Deacon says what she did took courage and gives her his blessing as she decides to go to New York.

While on a dinner date, Zach asks Will to try and talk to Deacon about posthumously releasing Rayna's album sooner rather than later. Bucky is worried that Zach will pull his money out of the label and after Will chats to Deacon he says he will think about it.

Maddie and Juliette arrive in New York where Maddie is interviewed by Trevor Noah, who avoids talking about Rayna when he sees Maddie tearing up. Backstage she performs her CMT Awards song for a group of people but the reality of the situation soon sets. Daphne and Scarlett have been watching the interview at home and Daphne says she still feels sick whenever she thinks of her mother, but Scarlett advises her to focus on the good times. Upstairs, Deacon finds a box with old journals belonging to Rayna and also comes across a video of Maddie as a toddler. The journal details her feelings for Deacon as well as song lyrics.

The following day, Maddie is interviewed by Harry Connick Jr., who asks her how she is coping and she responds that she is open to the possibility that life can work in mysterious ways. Later, she sees an article that has twisted what she has said, making it appear that she is thanking her mother for the good that has come from her death. She freaks out and tells Juliette that she wants to go home. When she gets home, Daphne is relieved that she is home and even though she thinks she is a horrible person Deacon tells her that her mother would be proud of her.

Zach has another unsuccessful meeting with Deacon but the latter is still standing his ground since the tracks are unfinished. Zach is prepared to pull his investment out of the label if the album is not recorded soon and Deacon eventually walks out of the meeting. Later, as he reads Rayna's journal Avery asks him if he wants any lunch or anything else. Deacon is not in a good mood as he feels everyone is asking too much of him and he cannot listen to the album right now. Juliette calls by to say she is disappointed in what happened in New York and tells Maddie that the "Today Show" will meet again with her next week. Scarlett gets into an argument with Juliette, causing Maddie to storm out.

After watching his and Rayna's wedding video, Deacon continues to read through her journal until he sees lots of empty pages. He finally breaks down after watching the video that Zach's cameraman compiled. He stops when he hears Rayna says that he is the best father for the girls and that he is someone who never gives up. He rushes downstairs to be met by Maddie and Daphne. Embracing them, he tells them he loves them and they say they have something to show him.

Everyone has gathered in Rayna's studio to help finishing recording the album, rather than having Deacon do it on his own. They each take turns in singing the songs as Rayna sings on a monitor. They present the finished album to Zach, who is pleased with the finished product. Everyone says their farewells outside the studio and Scarlett drops a bombshell to Gunnar - she is pregnant but does not know who the father is. 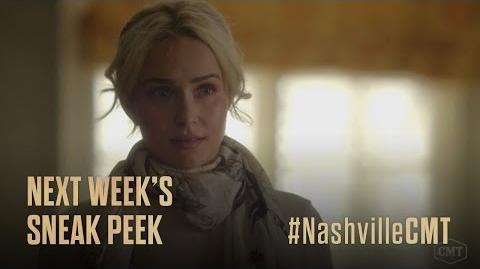 Retrieved from "https://nashville.fandom.com/wiki/Fire_and_Rain?oldid=22396"
Community content is available under CC-BY-SA unless otherwise noted.