Farther On is the twenty-first episode of the fifth season of Nashville. It was written by Liberty Godshall and directed by Michael Lohmann. It aired on August 3, 2017.

Deacon awakens on the couch to be faced with several text messages, including one with an offer to be a featured artist onstage at the Opry. Meanwhile, Maddie is busy on set filming her first television commercial for a brand of mascara called 'Mascara 24', which wants to use her song "Saved". She is not happy with the directions being barked at her and later at a party with the executives she is being bombarded with requests to perform her song onstage but Alyssa comes to the rescue, giving the excuse that she needs rest and sends her home. After much pleading from the executives, Alyssa takes her place and sings on the karaoke machine, impressing both the executives and Maddie, who smiles as she is leaving.

The following day, Maddie is back on the set having water doused on her while singing and looks completely miserable. When she learns that the executives want to change a lyric of the song to include the name of the mascara, she gets upset and leaves the set. Alyssa says she will sort everything out. When Deacon learns what has happened, he barges into Highway 65 to have a word with Zach, who tells him that Maddie must do the commercial with the lyric change or else.

Deacon goes home and finds Maddie in her room crying. He tells her she has to do the commercial but Maddie begs him not to make her do it. He says that part of being grown up is doing things you do not want to do, but she believes her songs are all that she has and came from the heart. Deacon relents although her integrity as a new artist is on the line. Deacon meets with Zach again, but the latter still refuses to accept 'no' as an answer. Deacon says they will just have to tell the commercial people that they will finish the commercial as long as the lyrics are kept the same but Zach and Alyssa tell him that Maddie will be in breach of her contract and that the commercial executives can pretty much do what they like. Deacon realizes he has been lied to about the brand partnership and Zach also informs him that if Maddie cannot get in line, he will walk away from Highway 65 with the money he invested.

Deacon invites Scarlett and Will to join him and Maddie and Daphne at the house, while Gunnar is on FaceTime, for a meeting, apologizing for Juliette and Hallie's absence. He explains the situation and Gunnar and Scarlett are on Maddie's side while Will does not say a thing. Daphne then pipes up saying that if they are afraid they can just let Zach do what he tells them to do or else they can stand up for what they believe is right. Deacon explains that it is not so simple and Daphne asks what the point of the label is if it is not what Rayna wanted it to be and they all say they trust him to make the right choice.

When Juliette learns about this, she is not too happy and phones Avery, who is more than preoccupied on tour with a crew member named Molly, who continuously flirts with him, although it is one-sided. She keeps putting ideas in his head, saying that relationships are meant to be fun. During a phone conversation with Juliette, she thanks him for always being there for her, while Molly is still there propositioning him.

Meanwhile, Jessie pulls up outside Highway 65 to see Deacon and tells him to come with her. She drives them to a wooded area, forcing him out of the car so that he can have an hour to himself to clear his head. He ends up heading to a lake and falls asleep, eventually waking up to find Jessie there. He confesses that people want him to move on but he still feels unable to do so. Jessie tells him that Rayna would want him to live in the here and now and not be burdened by the pain.

Deacon goes back to see Zach, informing him that they are done with branding. Zach is furious and reiterates that if they walk away from branding then he is done with the label. Deacon says they are just doing what they feel is right and he suggests that Zach do the same.

Deacon decides to go through with his performance at the Opry. Maddie and Daphne show up to support him and the former is crying as Rayna would be so proud of him. He takes to the stage following Pam Tills' introduction and dedicates his first song to his late wife. He performs two more songs, the latter being one he wrote 15 years prior. He gets a rapturous response from the audience and afterwards hugs his daughters before hugging Jessie, who has shown up to support him. Daphne sees the hug and does not look impressed. 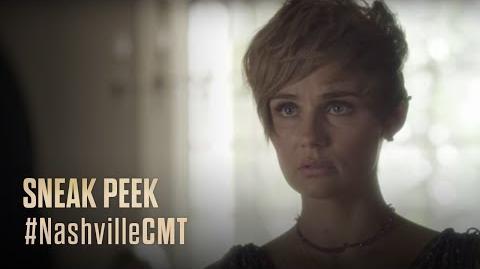