Don't Open That Door is the fifth episode of the second season of Nashville. It was written by Dana Greenblatt and directed by Michael Grossman. It first aired on October 23, 2013.

Rayna tries to work through the scar tissue issues that are affecting her ability to sing. She learns that Jeff Fordham wants the masters for her next album. Actually, he’s going to call it her “last” album since he’s convinced she can't sing anymore. Rayna wants to buy out her contract from Edgehill. She needs about $20 million. The only person she knows with that kind of money is her daddy. Lamar says he'll draw up the paperwork. He has no idea that his other daughter just turned over a boatload of incriminating evidence on him to the feds. Tandy makes a deal for immunity as long as she stays silent. She can't even tell Rayna.

Scarlett is pretty sure her uncle is moving on with his life after she meets Emma, who spent the night at his place. Deacon is, in fact, doing well as far as staying sober. His guitar-playing days, however, are still in doubt. He politely declines Juliette’s request to rejoin her on tour and is shocked to hear the rumors that Rayna can’t sing. Deacon confronts her about this. The truth is that Rayna just isn't sure what’s going to come out of her mouth when she opens it. She and Deacon agree to never say that they are done with music.

Juliette is having second thoughts about Layla being on her tour. It’s too late to turn back now though. So Juliette hatches a plan to limit her opening act’s time on stage. She lets Jeff Fordham know that she’s looking for a male act to balance out all the estrogen on her stage. Gunnar and Avery have the opposite problem as they work together on a new song. They feel the tune could use a female voice in the mix. Zoey is the ideal choice even if she is the best friend of the woman both men used to date. Things could get complicated, as Gunnar and Zoey share a kiss after a jam session. This leads to a trip to the bedroom.

Will is desperately trying to get back in Jeff’s good graces after being unable to secure Gunnar’s song. With a little help from Brent, Will gets a slot in Luke Wheeler’s benefit tour. It'll serve as an unofficial audition to become part of the Juliette Barnes tour. Will makes the most his chance. He thanks Brent for what he did. It wasn't a problem. Brent believes in Will, who obviously has conflicted feelings about this guy.

Scarlett is told how to handle the press during a media training session. Layla notices how nervous she is. She also sees how chummy she is with Will, a guy she obviously has her eye on. Layla advises Scarlett to be herself. This is the opposite of what the publicist told her. Scarlett gets blindsided by a question about Deacon at the press tour. Jeff shuffles her out of the area and then boots her out of the event. Will witnesses everything as it goes down. He knows Layla did something to mess with Scarlett, who comes home to see Deacon tinkering on her piano. She asks him to play for her as she sings.

Juliette performs at the Luke Wheeler benefit concert. The master of ceremonies says he has a little surprise for her. Rayna steps onto the stage to invite her to become a part of the Grand Ole Opry. Juliette is overwhelmed. She gives a heartfelt thank you before exiting the stage. Rayna tries to follow, but Luke Wheeler stops her. He begs her to sing a song. Rayna tries to get out of it, but is locked in once the music starts. She struggles at first, but Luke Wheeler and her fans help her fill in lapses during the song. This inspires Rayna to try one more time. This time she belts it out. The crowd goes wild. Rayna Jaymes is back!

After the concert, Will is told he’s “trending” thanks to a photo Layla posted online of the two of them together. Jeff Fordham thinks he should play up this relationship even if it isn't genuine. The music mogul then has a contentious chat with Rayna, who lets him know that she’s on her way out of Edgehill. In other news, Juliette overhears Luke Wheeler refer to her as a flash in the pan. This has her realizing how badly she treated Avery. Juliette invites him to rejoin the tour. Her offer is rejected. Avery would much rather work on his own music right where he’s at. Juliette kindly offers him the use of her studio anytime he wants.

Lamar tries to convince Teddy to let him be a corporate sponsor into an upcoming event in Nashville. That’s not gonna happen. Teddy says he was put in office to clean up the city from the likes of the man who helped him get there. A short time later, Lamar is arrested by federal agents. Tandy visits him in prison. She fears her father knows she’s the one who turned him in. He doesn’t. Lamar believes Teddy is behind this. He vows to make him pay dearly. 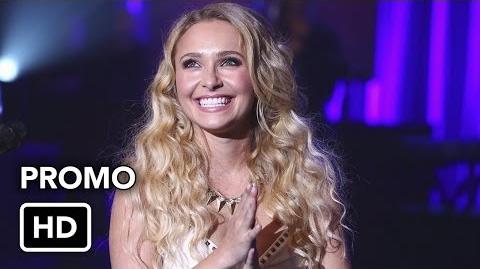