Dear Brother is the fourteenth episode of the first season of Nashville. It was written by Nancy Miller & Dana Greenblatt and directed by Jonathan Pontell. It first aired on February 27, 2013.

Deacon Claybourne follows a ritual whenever his birthday rolls around. He holes up in his home to watch the classic tearjerker Old Yeller all by his lonesome. Unbeknownst to the birthday boy, forces are at work to disrupt his plans. And by “forces,” we mean Juliette Barnes. She’s setting up a surprise party with all his friends which includes several music legends. She offers Scarlett a chance to be her opening act if she can trick her uncle into showing up at the Bluebird. The ruse is on!

Rayna lets Teddy know their daughter overheard him babbling sweet nothings to Peggy. She advises him to keep his new girlfriend away from the kids. Rayna is doing her best to keep the divorce news quiet, but that approach is deemed fruitless during a trip to the market. A checkout stand tabloid features her story on the front page. Rayna shuffles her daughters out of the store while Tandy buys up all the gossip rags. A crisis consultant advises her to skip Deacon’s surprise party. Rayna actually does feel that laying low is the way to go. That’s tough to do when the paparazzi camps outside the girls’ ballet class trying to get their money shots.

Lamar pays Rayna a visit. He says, “Don't you dare walk down the street anything less than proud to be who you are.” It’s actually some sound fatherly advice. Lamar then stops by to see Teddy. He’s not too pleased with the way the man he helped become mayor has treated his daughter. Lamar gives him his (Lamar's) picks for some positions, with emphasis upon a particular candidate for the job of deputy mayor. Teddy says he'll consider the choices, and stands up to Lamar, when Lamar isn't satisfied with that. Teddy also finds a way to get around the issue of being seen with Peggy by making her his financial consultant for special projects. Now they can be together under the guise of business. Teddy later asks Coleman to be his deputy mayor so they can join forces against Lamar.

Gunnar finds Scarlett scrubbing the floor. She explains that she's seeking inspiration for a song. He's happy to leave her to it, but she asks him to check if Jason has any clothes that need washing. Whilst doing so, Gunnar finds Jason's gun. Gunnar is totally ticked at Jason. He meets Jason on a bridge, tosses the piece into the lake, and tells Jason that he (Jason) is on his own from here on out.

Avery is having doubts about the changes his producer has been making to his music. Should he be letting someone change his sound so much he can hardly hear himself in it? He chances upon Watty White in a store that sells guitars, and asks his advice. "Should" isn't the right word in the music business, he's advised.

In other news, Jolene’s addiction counselor, Dante, lets Juliette know that he only got through his personal issues when his family stepped in to show support. This doesn't register with the party planner, as she’s busy rehearsing her new song “We Are Water.” She’s also soaking in the shocking news of her tour buddy’s impending divorce. Odds are now pretty favorable that Rayna will be a no-show at Deacon’s party.

SURPRISE! Deacon is shocked to see all of his friends gathered at the Bluebird. Some of the biggest names in music are there including Dan Auerbach, Vince Gill, Pam Tillis, Kip Moore and Kate York. Everyone is having a great time—even the birthday boy! Scarlett and Gunnar hold the crowd spellbound as they sing “I Will Fall.” Avery is not on the guest list, so he’s forced to watch the performance through the window outside. Rayna, on the other hand, is an invited guest. With Watty White beside her, she braves the crowd of paparazzi to head inside. For Deacon, this is the biggest surprise of his party.

Gunnar steps away from the festivities when the police ask him to come with them. He misses Deacon’s birthday speech which ends with a toast. Everyone drinks, including Jolene. Juliette gives up her hope to sing at Deacon's party in order to care for her mom. Rayna steps up to the stage to sing “Stronger Than Me” with Watty on guitar. Pam Tillis and Kate York also help her out. Scarlett notices that Gunnar isn't there. Later, Rayna has a heart-to-heart with Deacon. She says she wants to do right by him. Then she leaves him alone. Fear not. Deacon has companionship when he returns home in the form of Juliette’s birthday present, presented to him by her assistant Emily. It’s a dog. The cute pooch looks a lot like a young Old Yeller. The little guy is sure to be the best doggone dog in Nashville.

Jolene apologizes for ruining her daughter’s party. Juliette is surprised to learn that the party she’s talking about is one from when she was nine. She gives Dante the story of the time her mom canceled her birthday bash because she (Juliette's mother) blew the money to get wasted. Juliette admits that she had wished her mother would die. She asks Dante if he can truly help them. The answer to that one is yes.<

Gunnar learns that the cops came for him so he could identify a body. It’s his brother. Jason was beaten to death in an alley. A distraught Gunnar returns home. He blames himself for what happened. Scarlett assures him that it wasn't his fault. She holds him tight. Then she kisses him gently as a tear streaks down Gunnar’s face. The two of them stare into each other’s eyes before passion ultimately takes over. 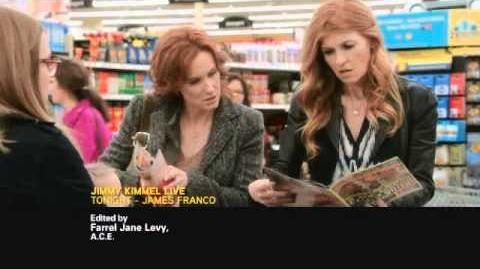