Can't Help But Wonder Where I'm Bound is the seventh episode of the final season of Nashville.  It was written by Tim Olshefski and directed by Allan Arkush. It aired on February 15, 2018.

As Maddie prepares to head off to Miami to see Jonah, Deacon is nervous but she reassures him that she will be okay. When she gets there, she is impressed with his house and later joins him at a concert venue where she takes to the stage to perform her collaboration with him. The following morning, she starts to bond more with Twig until Jonah interrupts them with news that he has to go to Austin to meet with director Richard Linklater, who is shooting a new film. Jonah apologises to Maddie for leaving her with his crew but reassures her that they will take care of her. Later, things take a nasty turn when Twig starts tripping out on magic mushrooms and Maddie is left to care for him alone. Once he recovers, they bond more and he tells her that his mother had a lot of problems so he had to care for his two younger siblings. He also reveals that he likes to produce music.

Back in Nashville, Deacon and Jessie attend a talent show at Daphne's and Jake's school. Brad is also attending and sits a couple of rows behind as Daphne takes to the stage and sings, which causes the dollar signs to go off in Brad's eyes. Following this, Jake takes to the stage and performs a rap, clearly aimed at his father since he tells the latter that the only thing he gave him was his last name. Afterwards, Deacon and Jessie heap praise on their kids while Brad makes a callous dig at his son wile not so subtly telling Deacon that Daphne should be on the bigger stage rather than performing in school auditoriums. Later, Daphne mentions to Deacon that she is interested in entering talent competition 'Nashville's Next Star' and Deacon tells her they have big plans for her when she is ready.

Elsewhere, Gunnar and Alannah are still firmly together and he tells her that three months ago he never thought he could be in another relationship. However, when her ex-boyfriend calls she leaves the room to take the call. Tensions within the band are still high as reporters want to interview them only because of Alannah. Later, she discovers that Brad sent the reporters since he was touting her as the "next big thing". Will is still grouchy due to the effects of the steroids but Avery says it is possible that having her in the band is what makes them more special. Avery heads to the airport with Cadence to meet Juliette only to discover that she never got on the plane. He tries to no avail to get in contact with her and when he phones the Church directly, he is told that she is free to contact him whenever she wants.

Later, Gunnar calls over to see Avery with pizza and beers and spills out his feelings about Alannah and the fact that she is seeing her ex-boyfriend. However, the next day at rehearsal when Gunnar questions her she points out that she was not looking for a serious relationship. That night, Will tries to hog the limelight but Alannah is able to hold her own. Afterwards, Will is still angry about the whole deal with Alannah being in the band but Avery tells them to sort it out among themselves since he has to be up early the next morning to fly to Bolivia.

The next day as Avery departs for Bolivia, Deacon goes over to Jessie's for dinner and compliments Jake about his performance at the talent show. He reveals that his own father never gave him such encouragement and encourages Jake to keep doing what he is doing as it is a gift. As Jake departs the house for his father's house, he shakes Deacon's hand and says goodbye to his mother, who then takes Deacon to her room.

Meanwhile, Will does some weightlifting at the gym but almost passes out and Alannah shows up at Gunnar's door for some fun of their own. Elsewhere, Avery arrives in Bolivia and asks to see Juliette, only to become angered when the receptionist continually refuses his request. Finally, she grants his wish and a person leads him to a small room where he finds Juliette sitting alone at a desk. She explains that up to now she has lived her life for everyone else and now she is doing things on her own terms. Furthermore, she tells him that she can no longer be with him or have anything to do with him or her old life and says that Cadence can come live with her. Realising that he may be losing her, Avery pleads with her to come home but her mind is already made up, as she kisses him on the head and turns her back on him. All that Avery can do is leave for Nashville, stunned and in tears. 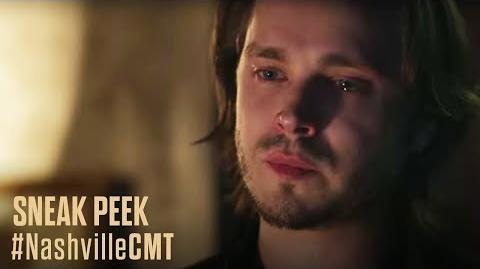