Nashville Wiki
Register
Don't have an account?
Sign In
Advertisement
in: Episodes, Season 6 Episodes, Episodes Airing in July,
and 2 more

Beyond the Sunset is the series finale of Nashville. It was written by Jesse Zwick and directed by Callie Khouri.  It aired on July 26, 2018.

It is the morning following the benefit and everyone is having breakfast with the girls wondering where Gideon is but it is of no concern to Deacon. Just then, Bucky walks in with news that the response to Deacon's recent performance that he has been offered the chance to go out on tour as a headliner. Deacon thinks it is a joke but Bucky is dead serious. Deacon says he will think about it, having the girls to consider et al.

The final of Nashville's Next Country Star has arrived and for the big showdown, each of the finalists have been given a song that is not their style and they have to make it work. Daphne is not a fan of hers and Ilse also thinks it is too mainstream for her. She is freaking out about it to Deacon and receives a letter from her grandfather wishing her luck. An angry Deacon thinks he is trying to manipulate her but she invites him to the show, regardless. Deacon pays his father a visit and learns that after 28 years of not drinking his father turned to the bottle after his home was destroyed but when Daphne discovered him and he saw the look on her face he stopped for good. He promises he will never hurt Deacon and the girls again. Unconvinced, Deacon walks away.

While Daphne gets ready for her big night, Maddie is recording with Twig, who is looking longingly at her while pretending to be her producer. He tells her she will be headlining her own tour soon and wants to be there when she does, which makes her noticeably uneasy. Later, when chatting with Scarlett, the latter notices that Maddie does not light up when she mentions Twig. Maddie feels like she should give him a chance but Scarlett she should just honor what she feels right now, be free and have fun. Maddie meets with Twig over a coffee and he can tell it is bad news. She thanks him for having the courage to tell her the truth when no one else would and gives him a pair of fancy new headphones, which he realizes is a consolation prize. She tells him he deserves to be at the center of her universe but she cannot do that at the moment. He says he will take her as she is but she thinks he deserves more and he starts to cry.

The night of the talent show final has arrived and a nervous Daphne waits backstage for her time to perform. She is the last to perform following a girl named Jenny Leigh and the guy she made friends with on the first day of auditions. When she takes to the stage Brad mentions that it has been a tough week for her and Daphne agrees before taking her guitar and surprising everyone with a slowed-down rendition of her song. Gideon is emotional and it also appears that Deacon may forgive him. When the results are announced, Daphne is not crowned the winner with Jenny Leigh winning instead and Deacon and Maddie head backstage to comfort a crying Daphne. Everyone is supportive and loving and Deacon thanks Ilse for her help and they make plans to get together to write songs when he returns from tour. The girls start teasing him as they think it could lead to something more.

Elsewhere, Brad shows up at Alannah's apartment to tell her that she is playing a gig the following night in Memphis. He is going too but they have separate rooms. After the show, he invites her up to his room as he says there are people who want to meet her. However, when she gets there, he is alone with a glass of whiskey. He starts kissing her and when she starts to protest, he tries to force himself on her and she punches him in the face. As she goes to leave, he says she knew what she was doing and what the deal was, further adding that if she does not hold up her side of the deal, he will make sure she never works again.

Sometime later back in Nashville, a smug as ever Brad is sitting behind his desk when in walks Alannah with Deacon and Zach. The latter takes a seat and nonchalantly tells him he is going to offer him $15 million for his record label and Brad will accept before he walks out. The offer is only 5% of the company's worth but if he does not accept it then Alannah will sell her story complete with a handy audio recording. Then, to help her case, a group of women also show up ready to tell their stories. Zach even has a paper trail that the women were paid to stay silent. Jessie also adds that along with this damning evidence she wants full custody of Jake as part of the arrangement.

Elswhere, Will and Gunnar miss being in the band and Gunnar asks Avery to rejoin them. They talk about all the growing up they have done over the past six years and Avery says he will think about it.

Over at Juliette's house, she is preparing to move out as she is removing items connected to her pop star past and Avery is pissed for a minute that she sold up without telling him but she assures him that the new farm is only a half an hour outside Nashville and they can make things work. Avery knows she is not telling him something but cannot figure it out, so he goes to see Hallie, who lets it drop that Juliette is pregnant. Avery runs back to Juliette who says she was not ready to tell him because she did not want to influence how he felt about her, She wants him to come to her and tell her he loves her and that he is worried about living without her. She says that if he does not feel that way, it is okay as she will survive without him. Later, she sits down at her keyboard and sings a song about beginning again.

A few months later, a montage shows that Daphne is signing to Highway 65, Maddie has moved into her own house, Zach and Will are back together and Jessie and Jake are watching a movie together. Alannah is opening for The Lumineers and Gunnar, Will and Avery are back together as The Last Highways doing a record store appearance for screaming fans.

A heavily pregnant Juliette is on her farm pushing Cadence on the swing when Avery shows up with a bag of his belongings. He tells her that he needs her and that he wants to spend the rest of his life with her but before he can say anything else she kisses him and he scoops Cadence off the swing to go off to see the animals.

Meanwhile, Deacon is on tour and having a blast. Scarlett is opening for him and has lost her engagement ring. It is revealed that she is engaged to a guitarist and he asks her if she is okay, as it is safely found and they kiss. Gideon shows up at the girls' invitation and tells his son that he has been reading about the tour and is so proud of him. Deacon thanks him and excuses himself. Sitting backstage, he has a flashback to his wedding night with Rayna. Deacon asks if all of this is real and she shows him the ring to prove it. He tells her it is all too good to be true and he cannot understand that all the regrets he had are gone. She says they are not gone, just passed. She knows they have hurt each other, but if someone gets into your bloodstream it does not matter how much you fail each other. She says she will love him forever as the moment is interrupted by Scarlett, who tells him it is time to go onstage.

Deacon takes to the stage and makes a speech about how much he loves everyone before singling out his father to join him onstage to sing with him. He asks him if he knows the song and Gideon says he knows all of his songs. The other characters, past and present as well as series creator Callie Khouri, join them onstage to sing a rendition of "A Life That's Good" with the latter thanking the city of Nashville, the cast and crew and the fans for the past six years before saying that is a wrap. 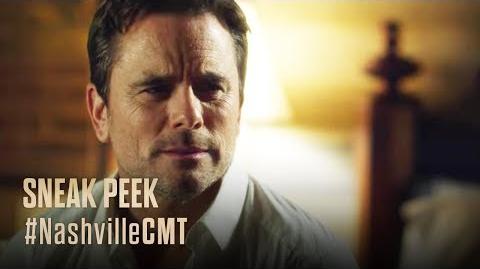