Beneath Still Waters is the sixth episode of the final season of Nashville.  It was written by Troy Putney and directed by Dan Lerner. It aired on February 8, 2018.

Deacon and Jessie go art window shopping but neither Jake or Daphne want to be there with them as he is on his phone and when Daphne passes a snide remark the date ends. When she and Deacon get home he attempts to talk to her but she is having none of it. Deacon apologises to Jessie and decides to invite her and Jake to dinner. However, just like their earlier date, it does not go well as Daphne storms off to her room. Jessie tells Deacon that she will have a word with her and tells Daphne that all she is trying to do is be her friend and is not wanting to replace Rayna. Daphne decides to forgive her and they move on past their differences.

Elsewhere, Gunnar notes that the band has been getting a great reaction on Twitter but that is mainly due to Alannah's presence. Will is noticeably cranky, which appears to be a reaction to his steroids, while Avery does not know what to do since Juliette ran off to Bolivia, leaving him to care for Cadence alone. Gunnar decides to meet up with Alannah alone to listen to some of her songs and she tells him about her parents, stating that she got her love of country music from her mother. He decides to head home after a while but then returns and they kiss before sleeping together. The following day in rehearsals, both Will and Avery are aware of what transpired the night before but their show that evening goes ahead without a hitch, apart from Will noticeably being jealous of Alannah's popularity and Brad Maitland attempting to poach her for his own label.

While working at the ranch, two girls ask Scarlett to sing for them sometime and while they brush the horses together, she asks Sean if he would like to join them but he refuses. Later at home she comes across a Facebook video of him singing at his graduation and after attending the Last Highways' gig she notices Sean wandering the streets and follows him into an alley. Clearly drunk, he reveals that he was stationed in Kandahar and she decides to bring him home for the night to sleep on her couch. However, he becomes cagey when she brings up his graduation video and the following morning they arrive at the ranch together. Scarlett learns from Dale that he served overseas and suffers from PTSD. Later that day, they overhear him singing alone and look on impressed. 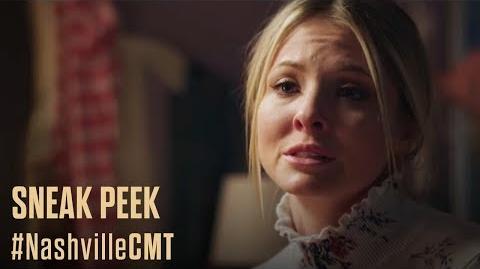