Nashville Wiki
Register
Don't have an account?
Sign In
Advertisement
in: Episodes, Season 3 Episodes, Episodes Airing in May,
and 2 more

Before You Go Make Sure You Know

Before You Go Make Sure You Know is the season finale of the third season of Nashville . It was written by Dee Johnson & Callie Khouri and directed by Callie Khouri. It first aired on May 13, 2015.

Juliette has her album finished in 36 hours and says she's over the intervention. Avery points out that she's been gone for two days and can't be bothered to hold the baby. She says she doesn't have time for "it" right now. She barges into Rayna's office and gives her the demo, but Rayna says that as her friend she doesn't think going on tour so soon after giving birth is a good idea. Juliette grabs the demo and tells everyone to go screw themselves, even firing Glenn.

She goes to Jeff to talk about her career, saying he can help get her career back on track. Avery meets with a doctor who tells him to reinforce the things that Juliette does well. However, when Avery attempts to talk to his wife, she freaks out again and tells him to give her the baby. She throws a glass at him as he's holding their daughter and in a state of shock he tells Juliette to get out.

Juliette and Jeff go to see Luke. He says her album is great but he's not going to steal her away from Rayna. Juliette says she's free to go so Luke has her as his support act. When Juliette returns home, Avery tells her the baby isn't safe with her and can't wrap his mind around why she would go to Jeff. He says she's disconnected and needs help. All Juliette can say is that she needs to tour and Avery asks if it's more than she needs them. Juliette says yes and later tells Luke she's never been more ready for anything in her life, as Avery takes the baby away.

Layla is doing radio interviews and Jeff is keeping her away from social media. Luke comes in and screams at Jeff for not telling him that Will is gay. The morning of Deacon's surgery, Bucky calls Rayna to discuss Layla's contract, which gives Jeff complete control over everything. Rayna tries to call Layla and leaves a message saying that she and Bucky have been trying to reach her and Jeff doesn't need to do all the talking. Layla hears the message when Jeff is out of the room and while he's gone, she searches his computer and discovers the drunken photos of her at Jade's party, realizing he's the one who sent the Tweets. She furiously attacks his car with a golf club and Jeff says he couldn't lose her.

Luke meets with Will to discuss the tabloid story. He's fine with Will and Kevin being in a relationship but it changes how the label will handle it. Will tells Kevin to deny any relationship, which makes Kevin unhappy. Luke drops Will as his support act. Will goes to see his dad and shows him the tabloid story, insisting he isn't gay. A press conference is held and Kevin tells the reporters that Will isn't gay but when Will stands on the podium he finally admits that he is gay. His dad is also there and walks out, clearly disgusted. Will later calls to see Kevin and says the sacrifice was worth it as he can finally tell Kevin he loves him.

Caleb asks Scarlett to move in with him and she agrees. She and Gunnar try to write a song together and they agree that their best songs came from what was going on in their lives. She suggests they should write again when he returns from Texas with Kiley and she moves in with Caleb. That night, she sends him lyrics in a text message.

Teddy meets with Dash, the U.S. Attorney, who says they're really after Tandy and Teddy says he's not comfortable with that. The attorney gives him an ultimatum: expose everyone or go to prison. He reveals that Highway 65 was set up with corrupt money as well. Teddy refuses to co-operate so he's arrested. Elsewhere, Deacon has a pre-surgical consult with Beverly. The doctor says he will be in hospital for eight days followed by eight weeks recuperation at home. After singing with the girls, Beverly says she might stick around in Nashville. Rayna thanks Beverly, who tells her she put her in a bad position and Beverly is the hero.

Plagued by nightmares that he'll flatline, Deacon asks Rayna to marry him. She says she dreams of their beautiful wedding and growing old together. They exchange vows and she says he better not make her a widow. Scarlett and the girls are in the waiting room when Gunnar calls by. He chats with Scarlett and they sing the song together. In the OR, things are not going well and as the TV shows footage of Teddy being arrested, Caleb tells Rayna and girls that he has bad news. 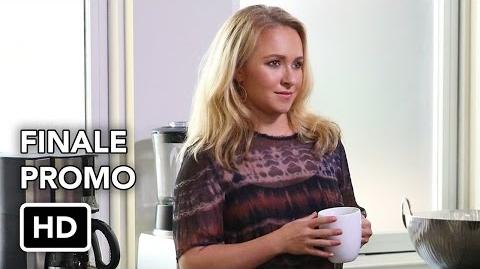