A Picture from Life's Other Side

A Picture from Life's Other Side is the twentieth episode of the first season of Nashville. It was written by Dee Johnson and directed by Michael Waxman. It first aired on May 15, 2013.

Rayna is under pressure to find acts for her new label. Scarlett is a lock, but she needs at least one more. Will crashes a secret audition session for a shot to be heard. He drops Scarlett’s name before Rayna agrees to give him a listen. Will impresses big time. He shares the good news with Scarlett, who instructs him to have a chat with Gunnar. She wants him to talk some sense into her boyfriend. This bad boy image he’s developing isn’t anything she cares for. This becomes abundantly clear after she hears Gunnar fake his way through a radio interview. Scarlett takes solace in the fact that he’ll be in the audience for her debut at the Grand Ole Opry.

Juliette asks Avery to help her get some new lyrics down on paper. He asks her about love songs. She tells him that she doesn’t believe in love; it doesn't exist. He tells her it does; he's been in love.

Juliette's last boyfriend, Dante, offers to turn over a sex video that could severely damage Juliette’s career for the bargain price of $2 million. Juliette agrees to the deal. Too bad Dante never shows for the drop. He ups the payoff price to $10 million. Juliette blames her mom for what’s happening. It’s clear that Jolene blames herself, too. She meets up with her old dealer to score some drugs. She also wants something else.

Juliette learns that Rayna and Deacon are together during rehearsals for the CMA Awards. She's in rare form as she complains about the jokes that have been written for her. Juliette also chastises a production assistant and makes some snide remarks to Glenn, who tries to introduce his new client, Sunny McKenzie. Rayna tells Juliette she has to earn respect, and advises her that even if she wins a CMA award, it won't mean that she's earned it. As for her problems with Dante, Juliette decides to not give him the money. That means the tape will be released.

Gunnar wows the crowd during a set at a dive club. Will tries to have a chat with him, but a bar regular interrupts. He want to know if Gunnar is as tough as his music suggests he is. So, he loudly asks where Gunnar did time. Gunnar says it's none of his business. The guy claims Gunnar's just a poser. Will insults the guy's drinking habits. This leads to a big old brawl. Everyone is arrested. Gunnar sits in jail as a nervous Scarlett is overawed by the Circle Room, reserved for those about to make their Oprey debut. She tries to contact Gunnar, by phone, so that she can bring him backstage. She receives a boxed gift from a guy in the audience. It’s a whisk. Scarlett immediately knows it’s from Avery. He handed her a whisk to sing into awhile back when he was trying to encourage her to sing without getting too nervous. Nice.

With her Uncle Deacon on guitar by her side, Scarlett holds the crowd spellbound at the Grand Ole Opry from the moment she takes the stage. Avery wears a big old smile as he gazes up at her from the audience. The crowd springs to its feet with wild applause once the song ends. Scarlett is overwhelmed. Meanwhile, Gunnar and Will are still locked up. The two of them apologize to each other. Will talks about his past. They both state how determined they are to become stars. Eventually, Scarlett bails them out. Will says he'll pay her back. As for Gunnar, he’s shocked when Scarlett reveals that she can’t be around him while he’s embracing this bad boy life. She fell in love with him, not his brother.

Tandy is moving forward with plans of taking over the family business. She basically asks the board of Wyatt Industries to stage a coup. That scenario seems unlikely once Lamar shows up unexpectedly at a meeting. He asks his daughter to hop up out of his seat.

Jolene swipes a number from her daughter’s phone. She lets Dante know that her daughter has opted not to pay the $10 million. She has the original $2 million though. She'll exchange it for the SD card with the video. Dante takes the bait. He meets up with Jolene. She's been using, and it seems he has too. We quickly learn that the other thing Jolene wanted from her dealer was a gun. She takes aim at Dante. He makes a move towards her. BANG! Jolene shoots him in the chest. She then calls her daughter to tell her that she loves her and drops the SD card into the garbage disposal, destroying it. Juliette can tell immediately that something is very, very wrong. She cancels the video.

Juliette finds Dante dead on the floor from his gunshot wound. She rushes over to the sofa to see that Jolene is dead from drugs. Juliette is devastated. A news report she watches alone has her crying again.

Teddy doesn't want Deacon anywhere near his girls. He initiates a temporary restraining order, served to Rayna, to keep him at bay. They can still see each other, and talk on the phone. Maddie overhears her mother saying "I love you" to someone. Rayna fesses up to Maddie that she and Deacon are seeing each other. Maddie knows that her mother and Deacon used to be dating one another before she married Teddy. She asks if that's why her father was so angry at Deacon being over for dinner. Rayna says that that's part of it, and she'll explain the rest when Maddie's older.

Rayna asks Lamar for help with the restraining order. Lamar arranges for a private hearing by a judge the next day. Rayna says that Teddy's trying to deny the girls access to their Uncle Deacon. Teddy points out that Deacon isn't really their uncle, and reminds that he's an alcoholic. Rayna says Deacon's been sober for thirteen years. Teddy says he has photographic evidence to the contrary. The judge decides the matter deserves a more thorough hearing in two weeks. Rayna knows that Teddy is afraid that he'll lose Maddie. She promises that she'll never do anything to hurt that relationship. She may not be able to keep that vow though. Maddie's been through some documents she found in her mother's wardrobe. She tearfully reports on the phone that she's found a paternity test. She thinks that her dad may not be her real father. 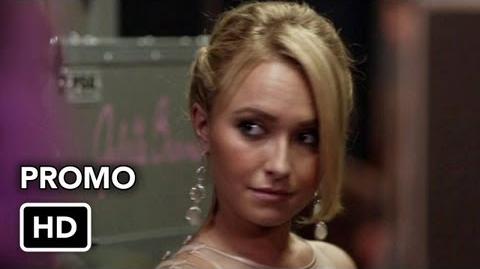 Nashville 1x20 Promo "A Picture From Life's Other Side" (HD)