A Little Bit Stronger is the sixth episode of the fifth season of Nashville. It was written by Richard Kramer and directed by Stephen Cragg. It first aired on February 2, 2017.

Following Carl Hockney's appearance at the Highway 65 offices, Rayna and Deacon install security features around their house. The security installation guy tells them he served in the army and has seen worse. When he leaves, Rayna and Deacon want to talk to Maddie about Clay. She has reservations about him due to the fact that he's 24 but Maddie retaliates by saying they hate him because he's black.

Meanwhile, Juliette is doing exercises with her therapist, who says that she came out as transgender to her father who has not taken the news well. As Juliette later attends church with Emily, Avery is doing a gig at Barista Parlor. Afterwards, a producer chats with him about the possibility of getting back into recording music and gives him his card. Juliette visits Hallie at a community center where she is entertaining children and tells her to stick with her as she is determined to get her recording music.

While out shopping for vintage records with Clay, he tells her that she is scared of him because of his bipolar disorder and she later has a heart-to-heart with her mother and when Maddie reveals that Clay is bipolar she says she fell in love with a guy with a drinking problem but only wants the best for her daughter. She also has a heart-to-heart with Deacon as Clay dumps her via voicemail only for them to later reconcile.

Elsewhere, Daphne has attracted the attention of a fellow schoolmate, Flynn Burnett, and initially rejects him before agreeing to be friends. While they are talking, Carl Hockney shows up and asks Daphne to give Rayna a package, which freaks her out. The incident is reported to the police but Daphne refuses to go home with Rayna and Deacon when she sees Flynn. The principal says everything will be fine and it is later reported that Hockney had been stalking Rayna for some months and has violated the terms of his restraining order.

Scarlett goes to see what Damien has done with the Exes' music video and is mesmerized with how he has captured her. Rayna and Zach Welles pay a visit to Luke Wheeler with a proposition to buy Wheelin' Dealin' Records from him and he agrees to sell it to them since he no longer has the desire to run it, opting to spend time on his estate to concentrate on other things. Zach also mentions to Will about Luke's plans to sell his label and offers him the chance to come to Highway 65.

Rayna tells Juliette about her plans for Highway 65 and offers her the chance to re-join her and is intrigued when Juliette announces her intention to record a gospel album. Avery decides to join Juliette in attending church. 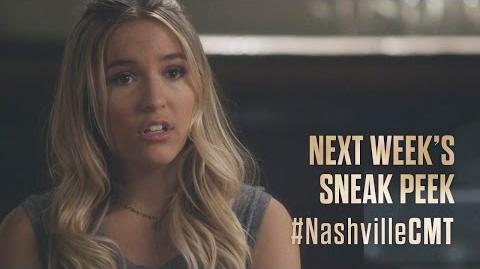