(Now and Then There's) A Fool Such as I

(Now and There's) A Fool Such as I is the fourteenth episode of the fifth season of Nashville. It was written by Callie Khouri and directed by John Carrafa. It aired on June 15, 2017.

The episode opens with Juliette practicing her walk in front of Glenn as she wants to make sure her limp is not noticeable. She wants to start writing songs again and Glenn, knowing what that means, declares "She's back" with a sly look on his face.

As Gunnar makes Scarlett breakfast, she is bombarded by messages from Damien, who is outside the house. Gunnar answers the door and an excited Damien exclaims that they are having a baby, hugging Gunnar and talking to Scarlett's stomach. He has plans to name the baby Rupert if it is a boy and wants to send the child to Eton since so many of his family have gone there. After a rather dangerous and fast car journey, they arrive at a lavish house where he intends for all of them to raise the child together. Gunnar is confused about the whole situation and while he goes outside to take a call, Scarlett and Damien chat and share a kiss. During a chat with Deacon later she breaks down as she does not know how to handle the whole situation and then she meets up with Damien, only for her to break up with him.

Meanwhile, Juliette is unhappy with the songs that are being sent to her and after her appearance on Jimmy Kimmel's show is canceled she pays a visit to producer Travis Shroud, who is more interested in giving a song to Maddie. Juliette listens to it herself and phones Travis later to lie, telling him that Maddie passed up the chance to record the song and that she is interested in doing herself. However, after meeting Maddie at the Highway 65 offices she attempts to write an e-mail as an apology for deciding to keep the song for herself but then deletes it before sending it.

Deacon gets a phone call to perform a set at the Bluebird but has doubts since he has not performed since Rayna's death. After a few words of advice from Bucky, who tells him it is what Rayna would want, he decides to go ahead with it but is not happy when Daphne opts out as she wants to spend time at home with Liv. Deacon goes alone and the evening goes well. Afterwards, he catches up with a singer named Jessie Caine, who is recently divorced and has returned to town.

While Maddie has been hanging out with Clay in his bedsit, Daphne phones to say that her song is being played on the radio. Things deteriorate for the couple following an uncomfortable radio interview that Maddie endures. While driving they are pulled over by a cop and believing the reason is due to Clay is black, Maddie films the whole incident on her phone and when they are arrested, she phones Deacon to come pick them up.  In the midst of all of this, two passers-by film the entire incident on their phones. The next time she meets up with Clay, who has been targeted by the press, he decides to split up with her since they live in two completely different worlds. This leaves her devastated and after a heart-to-heart with Deacon, she sings another version of the song she sang for Clay, as Deacon listens outside the room. 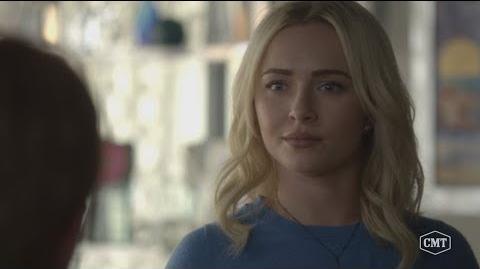