'Til the Pain Outwears the Shame

'Til the Pain Outwears the Shame is the second episode of the fourth season of Nashville. It was written by David Gould and directed by Jean de Segonzac. It first aired on September 30, 2015.

Juliette tells Rayna how everyone thinks Highway 65 is a joke and Rayna makes it her mission to sign "the next big thing" to her label.  That comes in the form of Markus Keen, the frontman of recently defunct rock band Boulevard, who Maddie and Daphne are fans of.  Rayna attends the school talent show and hears her daughters perform one of his songs and she phones Bucky to tell him that the need to sign Markus to her label.  Rayna books herself a seat on Markus' flight and they chat about where he wants to go with his solo career.  By the end of the flight, he has considered signing with her label.

Meanwhile, it has been five weeks since Avery has seen or spoken to Juliette and is confused by her breakdown on "Live! with Kelly & Michael".  At a launch party in Nashville, Jeff tells her that in order for her album to stay on top of all the charts she needs to spend time with Avery and their daughter.  Juliette says that Avery hates her and Jeff tells Avery to move back in with her as she's to scared to ask him herself.  However, when he arrives, he finds Juliette throwing a party with random strangers.  When she sees her husband and daughter, she orders everyone to leave.  She then begs him to stay and asks for his forgiveness.  He gives her the baby to hold and she tells her daughter that she's her mother.

The following day, the couple walks the red carpet with their daughter and the paparazzi showers them with questions.  When Juliette takes to the stage, her daughter cannot stop crying which proves a distraction.  Someone assures her that the baby needs her mother.  Juliette is unable to change her diaper and Avery takes over, telling her to mingle with her guests.  However, Juliette hops on a plane and even changes her cellphone number so that she finish her tour.  She says she should be good to go for a few more weeks without any family distractions.

Elsewhere, Luke is consulting with his PR about what to do with Will.  His assistant, Gabrielle, says that Luke's fans would not be willing to accept Will since he's gay.  Luke says that small town people are not small minded and invites her to Juliette's party so that she can see Will perform, but Luke's peers do have problems with the photographers taking photos that could support Will's lifestyle.  Luke has no choice but to drop Will from his label.

At a photoshoot, Gunnar notices that Scarlett is trying to avoid him.  When they get the photos, he thinks they're highly sexualized and deems them an inaccurate representation of their duo.  He calls a band meeting and isn't pleased when she brings Caleb along, but she doesn't care about the fact they have to do 50 dates.  That night, she's at her mother's bedside as her breathing tube is removed.  Beverly apologizes for all the terrible things she's done and is happy she didn't die before she got a chance to say how sorry she is.  Feeling guilty, Scarlett decides it's best to scale back the number of tour dates and calls another band meeting.  Gunnar isn't pleased about this and marches into Caleb's office, accusing him of making Scarlett have reservations about going out on tour.  Caleb says he is far from threatened and tells Gunnar that chances of a successful music career are slim.  Gunnar isn't pleased and informs him he might not be the right guy for Scarlett but neither is he.

Layla plays a gig at the Bluebird and notices that one table reserved for Rayna, Jeff and Bucky is empty.  It appears that her label is out scouting for new talent and her manager is comforting Juliette as she throws up.  After the show, an impressed Glenn gives her his business card.

At the hospital, Beverly is in good spirits as she chats with Deacon, telling him she heard him playing his guitar and is glad he stayed by her side.  She makes him go home to spend time with Maddie and Daphne.  Scarlett tells her mom that she will be scaling back the tour dates and turns her back to arrange some flowers.  Suddenly, Beverly's face twitches and when Scarlett turns around she falls unconscious. 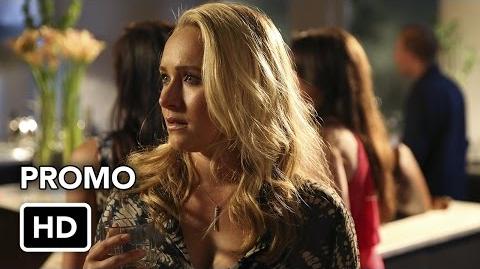 Nashville 4x02 Promo "'Til the Pain Outwears the Shame" (HD)