'Til I Can Make It On My Own

'Til I Can Make It On My Own is the thirteenth episode of the fifth season of Nashville. It was written by Scott Soccaccio and directed by Michael Lohmann. It aired on June 8, 2017.

As Juliette prepares to take to the stage, she begins to have blurred vision before a flashback to 36 hours prior shows her in the doctor's office with Avery as she is told that she has been having dissociative episodes. However, these episodes are not being caused by the plane crash but by some childhood trauma. As they leave the hospital, Juliette tells Avery that the issue must be due to her album flopping and she decides to phone Glenn to announce that she is going to do her comeback performance without the gospel choir.

Meanwhile at Rayna's house, Daphne is playing on her guitar and lies to Deacon about meeting up with Louisa when she replies to the latter's text message saying she cannot meet up. She blows off Deacon's offer to accompany him to the Music City Music Week Festival as she wants to meet up with Liv. When she arrives, Liv's friend, Wendy, does not take to her.

The homeless teens and Daphne head to a scrap yard in order to look for items to sell but while Daphne remains outside, the others climb over the fence only to be chased by the owner. As Liv attempts to climb over the fence she gets caught on the barbed wire and cuts her arm. When they get back to their abandoned building, Daphne wants to go to the emergency room but Wendy does not want to do so since the doctors will ask so many questions. Daphne asks Liv about her parents and she says that her biological parents were drug addicts and she did not get along with her foster parents. Daphne decides to bring Liv home with her and the latter is shocked to find how comfortable her surroundings are. While Daphne cleans up her wound she says she lives with her stepfather and sister and that her father is in prison and her mother is dead. Later when Deacon and Maddie are home, Daphne says she is not feeling well and just wants to go to bed, even though she grabs food and drink from the fridge, which confuses her sister and stepfather.

As Daphne and Liv watch an episode of "Daria" on her laptop, Deacon notices a bloodied rag in his trash can. He questions Daphne about it but she says that it must be his and closes the door in his face, although he has noticed the snacks and drinks in her room. Thinking they are in the clear, she and Liv laugh off the situation but Deacon bursts in to find Liv there and then tells Daphne that it is against the law to harbor homeless teenagers. Liv attempts to leave but then Deacon asks her how old she is and tells her she can stay with them for the time being.

Elsewhere, the gospel choir is not happy about being cut from the show and while she talks to Hallie she has a dissociative episode of her childhood with her father. During a soundcheck she has another dissociative which features her mother yelling at her father for caring more about "that baby" than his own wife. Back on the stage, Avery rushes to her aid.

Meanwhile, Zach is still pressuring Deacon into getting rid of Bucky since he feels his archaic ways are bringing the label and Deacon meets Cassadee Pope who's performing at the music festival. Zach has also come up with the idea of releasing Maddie's single at midnight but Deacon thinks it is risky, so Zach tells him to take 24 hours to think about it. When he and Bucky discuss it with Maddie she is all for the idea and Bucky realizes he is out of the loop. Deacon asks to have a word alone with Bucky and tells him that Zach wants him gone from the label, but adds that he will not allow that to happen.

Damien has been calling Scarlett since he is back in town, asking if they can meet, and although she initially ignores his messages and calls she decides to meet him at a restaurant. When she drops the bombshell that she is pregnant he is visibly stunned as he has never taken on such a big responsibility and is even more surprised that she has decided to keep the baby. She says it was a mistake coming and gets up to leave.

At the music festival, The Exes play a very subdued set and the following day Damien calls to her house, telling her that he wants to be involved in the child's life but stops short of proposing to her. Meanwhile, Hallie calls to see Juliette and while the latter attends to Cadence, Emily accidentally lets it slip that it was Juliette's decision to cut the gospel choir from the show. Hallie tells Juliette that she's "a narcissistic bitch" and leaves. When Juliette talks to Avery he tells her she should apologize to the choir.

As Juliette drives to the church, she has another episode of her mother telling her that her father is not coming home. When she talks to the gospel choir, she tells them that they do not know what it is like thinking that she is going to be paralyzed for the rest of her life and being afraid of being judged by her fans. She finishes by saying that she hopes they will join her onstage that evening.

That evening, Juliette is in her dressing room getting ready to take to the stage. Having also performed at the music festival, Avery has also been offered the chance to go out on tour but seeing the state Juliette is in decides to decline the offer. As Juliette prepares to head for the stage she is surprised to see Hallie and the gospel choir have shown up to perform with her. They take their place onstage and start to sing while Juliette waits backstage by the stairs. She has another episode, this time of her father telling her how proud he is of her and that he will always be with her, even if it is not physically. Onstage, Hallie and the gospel choir are confused as to why Juliette has yet to appear but then she starts to sing. As Avery and The Exes look on, the audience cheers.

Backstage, Bucky approaches Deacon to announce that he is stepping down from the label as Zach looks on. As Juliette's song continues, Daphne is asleep on the couch but Liv is up, looking at Deacon and Rayna's wedding photograph with a tear in her eye. Juliette's song finishes and everyone applauds. 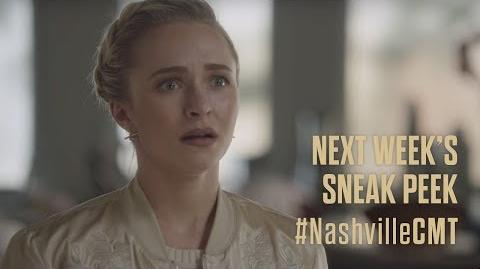